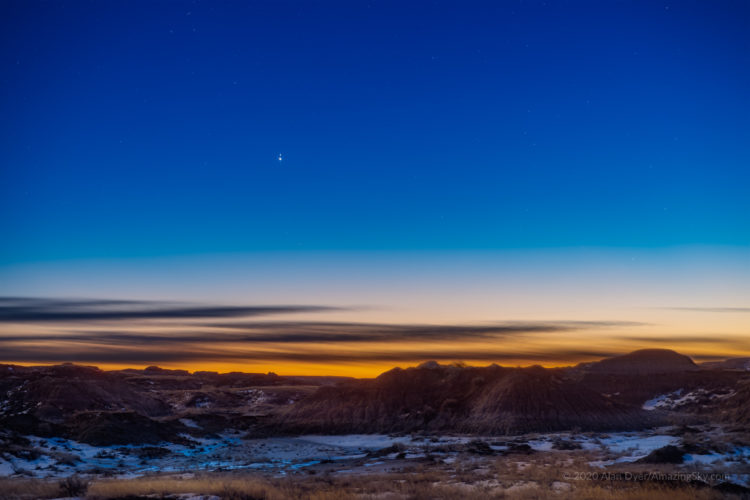 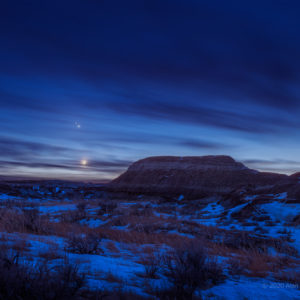 Jupiter and Saturn, on the eve of their rare “Great Conjunction,” shot here on December 20, 2020 from Dinosaur Provincial Park, Alberta. The two planets are very close here, only 8 arc minutes apart, just 2 arc minutes more than at closest approach the next night (which was cloudy!). Even so, they are resolved in this image with an 85mm lens, and were easily resolvable to the naked eye. Some of the moons of Jupiter are visible, particularly Callisto and Ganymede to the left of Jupiter.

This was a superb night at the Park, with perfect skies and a mild temperature of only 0° C and no wind or frost.

Illumination is from the twilight but also moonlight from the waxing quarter Moon off frame to the upper left.

This is a blend of tracked (for the sky, to prevent star trailing) and untracked (for the ground) exposures: 7 x 30 second exposures for the ground (to bring out foreground detail) at f/2.8 and 5 x 8-second exposures for the sky at f/4, all at ISO 400 and with the Rokinon 85mm lens and Canon EOS Ra camera. The camera was on the Sky-Watcher Star Adventurer 2i tracker. Stacking the tracked shots blurred the moving clouds and smoothed noise. Stacking the ground reduced noise.

I shot this well past traditional “blue hour” when there was still colour in the sky to the camera, but the sky was dark enough to show stars, and the ground was beginning to light up with moonlight, highlighting the snow and ice patches.