In a Lavender Field as a Butterfly 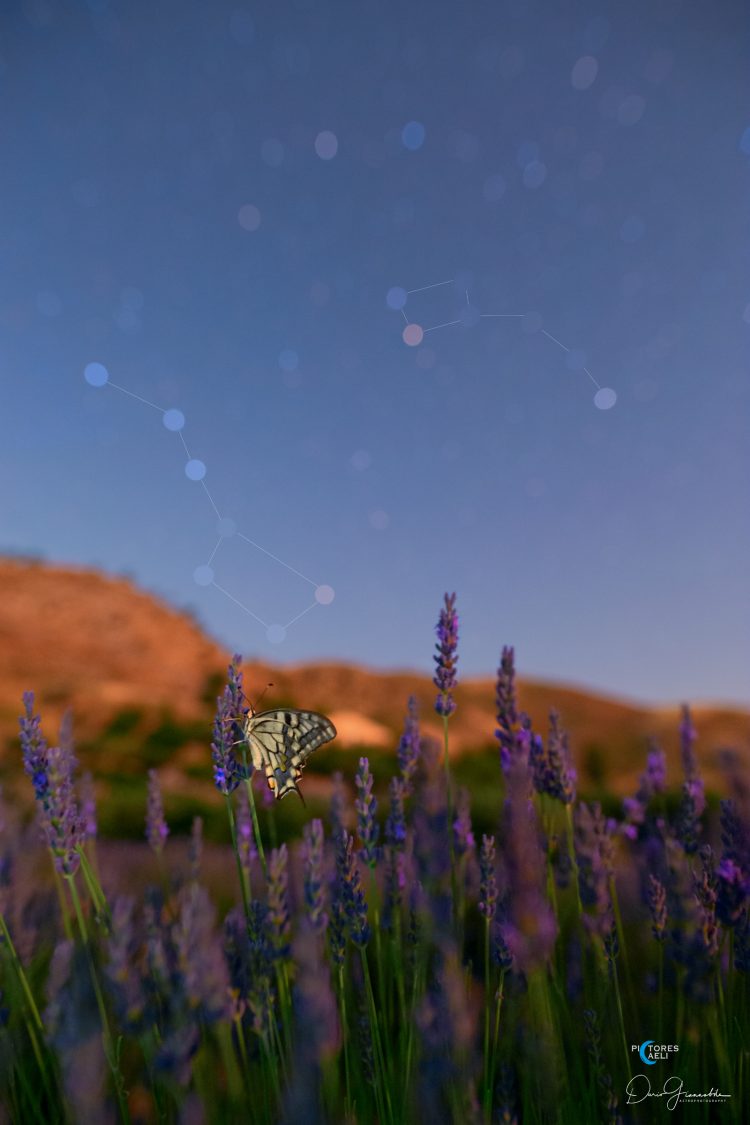 From the photographer: “The asterisms of the constellations of Ursa Major and Ursa Minor are certainly among the best known by astronomy enthusiasts. Both constellations are outlined by the alignment of at least 7 main stars that draw, at first glance, the shape of a dipper or a wagon. The ancient Greeks, who attributed a myth to each constellation, recognized the Big Dipper as the animal into which the nymph Callisto became.

Callisto, a nymph following Artemis, was seduced by Zeus who, in the meantime, had assumed the appearance of the goddess of the hunt. She could not hide her pregnancy from her goddess who, in anger, chased her away from her entourage. Subsequently Hera, wife of Zeus, jealous betrayal of him, transformed Callisto into a bear who was placed into the sky taking the shape of the constellation of the Great Bear (Ursa Major) while her son was transformed into the constellation of the Lesser Bear (Ursa Minor).

This is only one version of the myth and other tales are associated with the two constellations.
The main stars of the Ursa Major constellation are Alkaid, Mizar and Alcor (a double perspective), and Alioth for the handle. Megrez, Phecda, Merak, Dubhe for the quadrilateral (read counterclockwise). The main stars of the Ursa Minor are: Polaris, Yildun, Erodelus for the handle. Ahfa, Anwar, Pherkard and Kochab for the quadrilateral (read counterclockwise).
As you can see by reading the name of the stars, the North Star belongs to the Ursa Minor and is the main element of interest for these two constellations. In fact, it coincides, with a good degree of approximation, the north celestial pole or the rotation fulcrum for the stars of the northern hemisphere.

To identify the North Star in the northern sky, just identify the seven stars of the constellation of Ursa Major (brighter than those of the Ursa Minor) and imagine connecting Merak and Dubhe with a line and extending it to meet the North Star. This image can be defined as a macro photograph set under the stars. The first subject to appear is the butterfly (Papilio Machaon) perched on lavender flowers. Focusing on a subject this close has blurred the stars in the sky into small circles. With them it is possible to easily identify the shape of the asterism of the two constellations but also the color of the stars. It is no coincidence that Kochab and Dubhe appear warmer than the remaining blue-tinted stars. The entire image appears bright because it is illuminated by the gentle light of the Moon near the last quarter on the night between 20 and 21 June.

A final note deserves the lavender field cultivated by the Lavanda di Sicilia company which represents excellence in niche crops in the region. This image is delicate and dreamy and shows, in the harmony of the elements and colors, all the beauty of nature.”