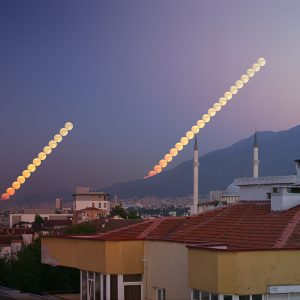 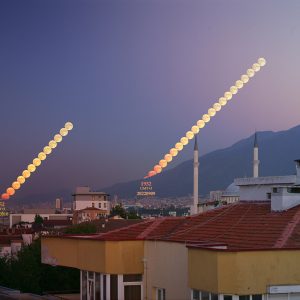 From the photographer: “In 2021, I had decided to photograph the full Moon of September rising, as seen from the rooftop of our apartment building, which has an open view of the eastern horizon. My original plan was to record the Moon rise on as many as 5 consecutive days, but I was able to shoot 2 days only, because of the weather having other ideas.

After the half-boiled attempt of 2021, I waited to try the series again a year later. And unlike in 2021, the weather was good. So, I was able to do a similar series from the same spot in 4 evenings, from 8th to 11th September.

8th September has the Moon appearing at 19:29 local time, GMT+3, just 10 minutes after sunset. The Moon still had 2 days until full, but Uludağ blocking the southeastern and southern sky delayed the moonrise, which would otherwise happen at 18:51. I photographed the Moon with a 135-mm lens every 2 minutes 15 seconds until 20:21 GMT+3, as it was just about to leave its field of view.

On 9th, the Moon appeared at 19:33, just 4 minutes later than the previous evening. Of course, Uludağ is still the main cause here, as its granite mass delayed the moonrise by 10 minutes. While I photographed the Moon again every 2 minutes 15 seconds, I photographed the horizon with a second camera, slowly tracing the horizon from ESE to east in 45 minutes as the sky darkened. This series of 22 pictures made my background panorama.

On 10th, moonrise happened 1952, just 2 minutes after the theoretical time, as eastern horizon is generally clear of natural obstacles. I duly photographed the Moon rising with the same interval, until it cleared the field.

On 11th, we had some clouds forecast to arrive in the evening. And some clouds were already visible in the west and northwest when I set up at the rooftop. As the moonrise was happening at a darker hour of 20:15, I was not sure if the eastern horizon was clear enough for the Moon to be sighted. Apparently it was, as the Moon did peek at 20:16, with Jupiter shining just 2.5 degrees above it. Yet, there were patches of clouds in the east as well, with the Moon getting blocked for 1~2 minute intervals now and then. Still, I was able to get a decent series.

As I sat to process the images, I decided I should do something different for 2022 edition. Instead of using the full series of moonrise on all 4 days, I opted to use the full series for 8th September only, which ends at 20:21:00. And, the series of the following 3 days also end at the same time 20:21 GMT+3, slightly lower in the sky.

I think this better shows how the azimuth of the Moon changes from day to day, and also how the Moon stays visible in the evening sky, shining at a similar altitude. Around Autumnal Equinox, the daily advance of moonrise can be as short as 25 minutes, instead of the usual 50 minutes. This abundance of moonlight used to help farmers in far northerly latitudes during harvest season, hence the name Harvest Moon. Meanwhile here in Turkey, grain harvest happens in June and July.”