Brush Stroke and the Strawberry Moon 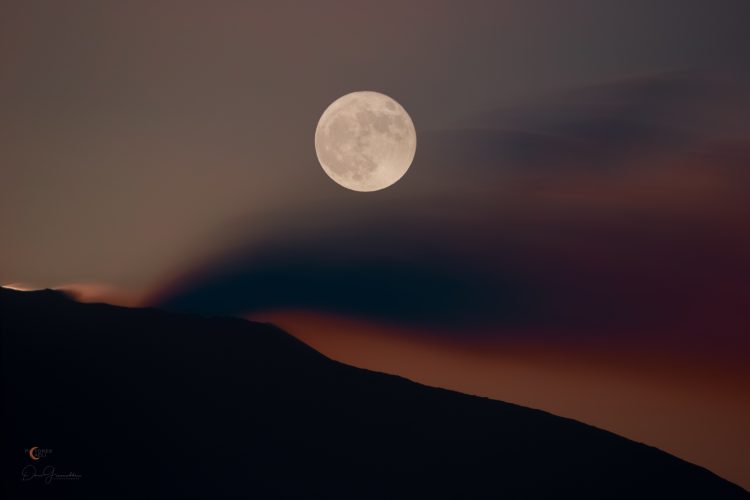 A photo composite of multiple exposures. From the photographer: “What you see is my personal artistic interpretation of the super Moon of June 2022 also called Strawberry Moon.

I wanted to convey an emotion of serenity and beauty by making nature express its ability to amaze us through plays of light and shapes. For this reason I went to the west side of the Etna volcano to film the moon about to rise above the south-east crater. At that moment a degassing activity was in progress from the summit craters, thanks to which a tail of vapors and ashes was created, pushed by the wind towards the south. So I thought of interpreting the shot trying to get a silky and very soft cloud effect in the sky with all the shades of color that I could have captured.

For this reason I lowered the ISO and increased the exposure times to make sure that the wind gave shape to the volcanic ash. The effect you see was obtained through 14 consecutive shots each of 30 seconds for a total of 7 equivalent minutes during which the cloud took a soft shape and dyed with multiple colors. Some of these depended on the changed colors of the sky and others on the nearby contexts such as the town of Maletto or, better still, the few flashes of the still fluid lava on the Bove valley. The sequence was interrupted as soon as the Moon rose which instead was resumed very quickly. Originally I wanted to make a moon trail but the first shots of the Moon presented the well-defined shape of the cloud against the light (black on the bright background of the lunar disk) due to the extremely short shutter speeds (frozen detail). These shots did not lend themselves to the dreamlike atmosphere of the moving cloud and therefore were not taken into consideration. Instead, I selected the shot of the Moon in the center of the frame after waiting and shooting the entire passage in the frame that lasted about 15 minutes at the focal length of 500mm on the FF sensor without changing the alignment and the shooting position. The final image contains a great emotion that I hope can be transmitted to you too.”