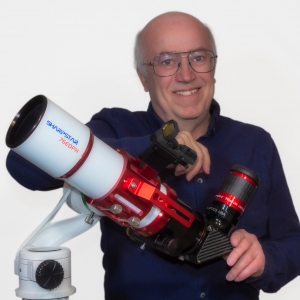 Alan Dyer is one of Canada’s best-known astronomy authors and astrophotographers. He has been shooting the sky since the 1980s with film, and since the early 2000s with Canon, Nikon and Sony DSLRs and mirrorless cameras. He takes most of his images at locations in the mountains, prairies, and badlands of his home province of Alberta, which include several UNESCO World Heritage Sites.Alan’s interests include not only nightscape and time-lapse photography, but also deep-sky imaging. He conducts frequent workshops on these areas of photography across Canada, including on the use of Adobe Photoshop to process astronomical images.His photographs have appeared in many print publications, including Astronomy, Sky & Telescope, National Geographic, Air & Space, Sky At Night, Interstellarum, and on various major news websites.Alan also writes regular articles for SkyNews, Canada’s magazine of stargazing, and serves as a contributing editor to Sky & Telescope where he writes frequent reviews of astronomical equipment. He has co-authored several best-selling guidebooks for amateur astronomers, including The Backyard Astronomer’s Guide. Most recently Alan authored and published the multi-media ebook How to Photograph and Process Nightscapes and Time-Lapses, for the Apple Books Store.Alan recently retired from some 40 years of producing planetarium shows for theatres in Winnipeg, Edmonton, and Calgary in western Canada, including most recently for the Digistar-equipped Digital Dome at the TELUS Spark science centre in Calgary. His award-winning planetarium shows have played in theatres across Canada.As an amateur astronomer Alan takes the opportunity as often as possible to visit southern latitudes in pursuit of fabulous southern hemisphere skies. He also visits northern Canada each winter helping to lead tours to see the northern lights. Another of his celestial obsessions, eclipse chasing, has taken him to every continent, chalking up 16 total solar eclipses. Asteroid 78434 is named for him.