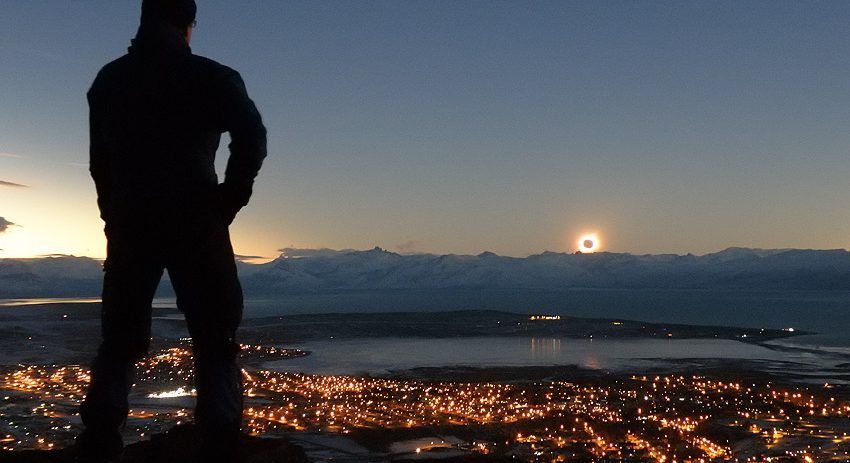 2010 July 18: The total solar eclipse of 11 July 2010 was a spectacular experience for sky photographers and eclipse chasers. The narrow total eclipse track (moonâ€™s shadow) passed through very remote locations on the planet but this did not prevented The World at Night photographers from getting to the most interesting sites along the eclipse path. Last year in July 2009 the moon shadow passed through busted cities of India and China including Shanghai of 20 million population but there was no major city along the eclipse track this year. However some of the worldâ€™s greatest sceneries in the Pacific Ocean and extreme Southern America hosted the shadow.

Cook Islands
Touched down the earth about 2000 km off the coast of New Zealand, the moon shadow raced through the Pacific Ocean to reach the first large group of eclipse observers in the island of Mangaia; the most southerly of the Cook Islands. TWAN team members and Tunc Tezel and P.K. Chen from Turkey and Taiwan were located in this volcanic remnant to experience a totality of over 3 minutes but passing clouds obscured the clear view of totality. Both Tunc and PK have nearly missed the last year eclipse under cloudy sky of eastern China and were very motivated to catch this one. But they enjoyed the beauty of southern sky from this remote and absolutely dark site and shared their passion to astronomy with the small 500 Polynesian population of this 10 km wide island. Eclipse chasing is not all about eclipses, it’s also a way to meet people and learn and respect other cultures. It’s a chance to share your passion with others.

Tahiti
The shadow continued eastward to Tahiti while the main island missed the totality, an American member of TWAN, and Dennis Mammana, a veteran eclipse observer and astronomy popularizer, was an invited expert on an eclipse trip aboard Aranui 3 cruise ship. Located not far from small atoll paradises of French Polynesia in the Pacific waters, the total eclipse lasted over 4 minutes. Observing from the deck of the ship was a challenge with passing clouds. But with the captainâ€™s effort the ship quickly moved away and the eclipsed sun appeared in an open window between the clouds.

Eclipse Flight
The totality reached the longest amount of 5m 20s in the middle of the ocean; hundreds of kilometers away from any land. But some eclipse chasers even try to beat the rules of nature! Well-known eclipse specialist and Fred Espenak who co-author the NASA bulletins for all total and annular solar eclipses is also a TWAN photographer. He was an invited expert on-board EFLIGHT 2010. Departed from Papeete (Tahiti) the 7-hour return flight took passengers to the middle of the eclipse track, 39000 feet above the clouds over Pacific Ocean and some 2500 km east of Tahiti. Seats on one side of the Airbus A319 were completely removed for better viewing of the eclipse at 45 degrees altitude above the horizon. But most striking was that the eclipse lasted 9 minutes and 23 seconds as the plane chased the shadow of the moon on this region where the ground speed of shadow was slowed down to “only” 2200 km/h. In fact the observable totality from the flight was about 2 minutes longer than the theoretical maximum of 7m 32s that nature will ever allow for a ground-based observer.

The first eclipse I personally experienced was only 14 seconds at sunrise in the beginning of the eclipse track in October 1995. When I saw the longest total solar eclipse of the 21st century on 22 July 2009 from the middle of Pacific Ocean, the 6m 42s totality was like a whole life of joy to me. I can imagine how exciting an even longer eclipse experience could be for the eclipse chasers on the EFLIGHT 2010. Aboard the flight and over 12 km above the ocean the observers had the chance of seeing the approaching and escaping shadow for several minutes; a view which is barely visible for few seconds from overlooking sites on the ground.

Easter Island
After passing the mid-point of the eclipse track, totality crossed the Easter Island, a remote land of mysterious moai statues erased from the island’s yet-to-understand history. Three TWAN members and Dennis di Cicco (senior editor at Sky and Telescope magazine), and Juan Carlos Casado from Spain, and Stephane Guisard of ESO observatories in Chile were located on the island. Stephane Guisard did already a TWAN imaging mission to the Easter Island last year and had investigated all the locations for his photography. He started shooting time-lapse videos from the night before just besides some of the 887 mysterious stone statues carved a thousand years ago on various sites of the island. There were concerns for the usual passing clouds above the island but the eclipse chasers were fortunate with a clear window during 4.5 minutes of totality. The eclipsed sun was seen at 40 degrees above the Easter Island horizon and those who were near the moai statues experienced a scene of lifetime above these world-known landmarks. Planets Mercury and the dazzling Venus was seen on the right (east) of the eclipsed sun while prominent constellation Orion and bright star Sirius was barely visible on the left of the sun in the semi-twilight glow of the solar corona.

Patagonia
The eclipse final landfall destination was about 4000 km west of the Easter Island in Patagonia, the extreme southern end of Argentina and Chile. Many eclipse chasers were located in El Calafate in Argentina not far from the world-famous Moreno Glacier. The totality arrived here right at the sunset where clouds or any obscuring horizon features was threatening the visibility. Chances were little but El Calafate sky stunned all the visiting eclipse chasers. It was crystal clear near the sunset and the eclipsed sun appeared just above snow-covered mountains, Lake Argentino, and the frozen winter landscape of Patagonia. This was certainly one of the most stunning natural scenes to watch.

The next total solar eclipse will be on 13 November 2012 and the lunar shadow will pass over northern Australia and the Pacific Ocean.

See the Eclipse Gallery on The World at Night; a unique photo collection of solar and lunar eclipses.

See photos of 11 July 2010 eclipse by TWAN guest photographers on the Guest Gallery. If you have a unique landscape photo of the eclipse this is the right place to submit it.

See TWAN photos of the 11 July 2010 solar eclipse on the National Geographic News and NASA’s Astronomy Picture of the Day.

See the Easter Island gallery on The World at Night; a collection of TWAN photos and time-lapse videos taken at this amazing island of natural and cultural wonders. 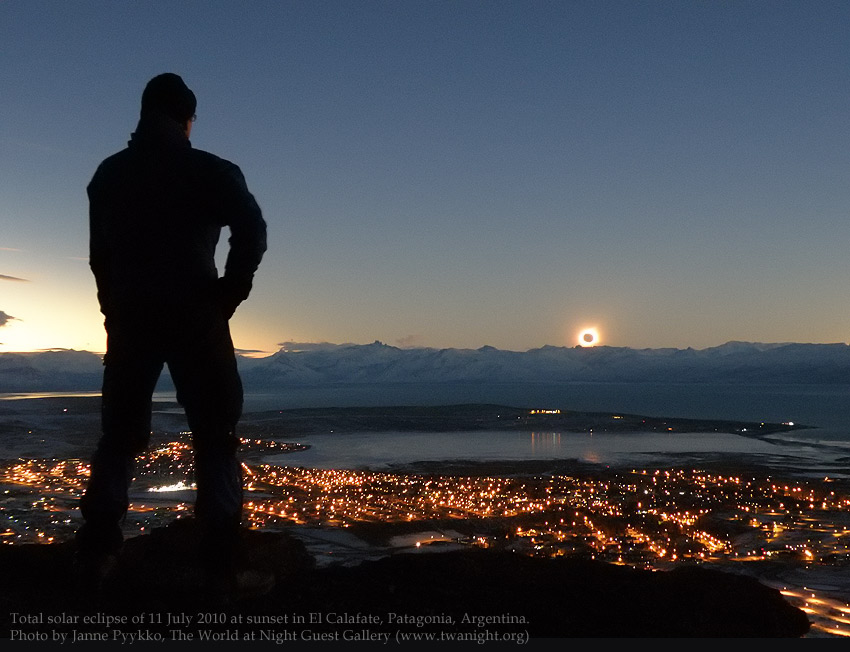