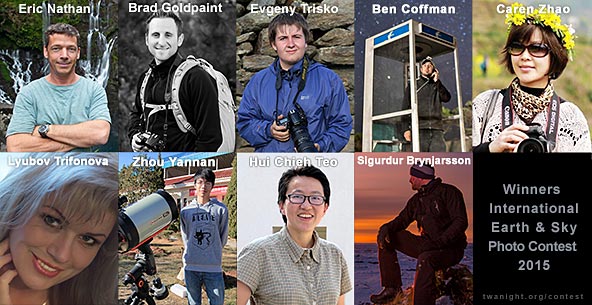 A stunning collection of nightscape photos (night sky above landscape) are selected as the winners and honorable mention photos of the 6th International Earth & Sky Photo Contest. The contest was open to anyone of any age, anywhere in the world; to both professional and amateur/hobby photographers. About 1000 entries were received and 839 of them were approved for the contest judging.

David Malin of the judging panel, a world-known pioneer in scientific astrophotography, explains that “This competition encourages photographers with imagination to push their cameras to their technical limits, and to produce eye-catching images that appear perfectly natural and are aesthetically pleasing. Hundreds of nightscape photographers from across the world rose to the challenge, and the panel of nine judges was ultimately faced with finding the best from over 800 images.” TWAN founder and the contest chair, Babak Tafreshi, adds “The sky above us is an essential part of our nature, a heritage for us and other species on this planet. The contest main goal is to present the night sky in this broader context that relates to all of us, while it is also astronomers laboratory to explore the universe. Perhaps from this perspective we can better preserve the natural night sky and reconnect it with our modern life.”

According to the contest theme of “Dark Skies Importance” the submitted photos were judged in two categories: “Beauty of The Night Sky” and “Against The Lights”. The selected images are those most effective in impressing public on both how important and delicate the starry sky is as an affecting part of our nature, and also how bad the problem of light pollution has become. Today, most city skies are virtually devoid of stars. Light pollution (excessive light that scatters to the sky instead of illuminating the ground) not only is a major waste of energy, it also obscures the stars, disrupts ecosystems and has adverse health effects.

Contest Winners
The first prize in Against the Lights category (and the overall contest winner) goes to Eric Nathan, who lives in South Africa and the UK, for his image â€œStar Trails Above Table Mountainâ€ taken in June 2014 from South Africa. “The image juxtaposes a moonlit Table Mountain and the star trails above it with the artificial lights of Cape Town, a stack of over nine hundred 30-second exposures”, noted by the photographer. Commented by contest judge David Malin “The view of Table Mountain from the summit of Lion’s Head is spectacular in daylight but is astonishing by night. In this beautiful image the mountain is framed by the southern suburbs of Cape Town stretching into the distance on the left and the beachside settlements of Camps Bay on the right. Overhead the stars circle the south celestial pole in a blue sky, lit by a slender moon.” Contest Judge James Richardson, a long-time National Geographic photographer, noted “The play of light patterns here, with the circling stars set against the urban labyrinths, makes this image a delight to explore, while at the same time showing the power of city lights to dominate the natural world.”

The photo wins a complete set of Advanced Polaris (AP) by Vixen in Japan, a new released portable star tracking mount for both astrophotographers and visual observers. The smartly designed and collapsible Advanced Polaris takes the simple equatorial mount to a new level where you can customize it for various purposes. The mount core can be used standing alone as an ultra portable drive for a camera while joining other segments it becomes a telescope mount.

The first prize in Beauty of the Night Sky category goes to Lyubov Trifonova from Russia, for “The Enchanted Forest” captured in December 2014. The Moon and the northern lights (aurora borealis) lit up the snow-covered forest in Murmansk, northwestern Russia. Noted by the judge David Malin “This well composed and executed image captures the pin-sharp images of the Pleiades and Hyades through swirling bands of auroral light over snow-covered trees. The snow itself sparkles in the light of the moon and Lyubov has pointed her camera so the trees appear to reach for the sky. Beautiful” Contest judge James Richardson noted “Light and winter snow are dancing in every corner of this image. The green of the Aurora is beautiful, but so too are the colors of the snow, crisp and white under the moonlight, tinged yellow where they are lit by some artificial lighting. And piercing through are the pinpoint stars.”

The photo wins a $500 gift certificates from Astronomik, the manufacturer of finest astronomical filters including the well-known clip filters for Canon DSLR cameras (such as light pollution filter).

The second place winner in the Beauty category is Brad Goldpaint of the United States, for his photo “Moonlit Darklings” taken in July 2014. The moonlight strikes Mt Rainier in Washington, northwestern USA, as the Milky Way drifts across the night sky. The judge James Richardson notes “Here is the dark brooding night, the mysterious valley leading towards the towering mountain and the infinitely distant Milky Way, all part of one continuous landscape. This is a subtly crafted composition that invites reflection as much as it does awe.”

“Above the Light Pollution” by Evgeny Trisko of Russia is the second place winner in the Lights category. Taken in August 2014 from near Mount Elbrus in Russia. Contest judge David Malin notes â€œhigh in the remote northern Caucasus, the dome of the Pik Terskol Observatory appears about to be overwhelmed by the dramatic forces of nature, in this astonishing image. Angry clouds advancing over the mountains are lit by streetlights in the valleys, while overhead the Milky Way rises majestically over the turmoil below.â€ Contest judge James Richardson notes “What a magical, misty image with light coming both from the sky and from out of the valleys, illuminating the clouds that threaten to obscure the Milky Way. A really masterful composition.”

The other winners in Beauty of the Night Sky category are:
Third place: “A Raising of the Hackles” by Ben Coffman of Portland, USA, for his outstanding capture of the rising Milky Way and the crescent Moon in the crystal clear winter morning sky of the Crater Lake in Oregon (Feb 2015). Contest judge James Richardson notes “The moonlight glistening on the waters of Crater Lake set this image apart. From the sweeping snowbanks in the foreground to the volcanic crater sulking in the shadows to the grand sweep of the Milky Way across the sky this image suggests monumental forces that whisper their power.”

Fourth place: “The Dome” by Sigurdur William Brynjarsson of Iceland, captured in December 2014. An enchanting aurora display is captured in this 180-degree panoramic view from near Reykjavik, the Iceland’s capital. Contest judge David Malin notes “The snow-covered Icelandic lava-field is dominated by an unusually symmetrical auroral arch, which appears to emerge from the lights of two towns. Beneath it are the stars of Orion and the Pleiades. While the auroral display was a fortunate and short-lived event, Brynjarsson made excellent use of it to capture a stunning image.”

The photo wins a widefield binocular from Vixen Europe (the distributor of Vixen telescopes and binoculars in Europe).

Fifth place: “Strolls in the Star River” by Caren Zhao of China, taken in February 2015 from Salar de Uyuni, the world’s
largest salt flat located in Bolivia. The arc of the southern Milky Way and the zodiacal light appears in this panoramic view. The photographer notes “There was no escape from this breath-taking intoxication!” The photographer is granted a free registration pass to the International Nightscape Conference on 2015 Sep 29 – Oct 2 in La Palma, Canary Islands, a first of its kind event by TWAN.

The 3rd to 5th winners in Against the Lights category are:
Third place: “Blood Moon Rises Over Chongqing” by Zhou Yannan of China. As the full moon was rising after sunset on 2014 Oct 8, a total lunar eclipse was in progress seen from Chongqing, China. In this photo-sequence The rising eclipsed Moon began as a dark reddened disk and gradually comes out of the shadow while rising above the Yangtze River. Noted by David Malin “Photographing elusive astronomical events through the dusty air of brightly lit city of Chongquing would appear impossible. However, Zhou Yannan has managed to capture the orange light of the Earth’s shadow crossing the Moon during the eclipse as it rises through the flashing lights of countless aircraft.”

The image wins a widefield binocular from Vixen Europe.

Fourth place: “Star Trails over Bromo” by Hui Chieh Teoh of Malaysia is a June 2014 time-exposure image of star trails around the south celestial pole, above volcanoes in the Bromo Tengger Semeru National Park of East Java, Indonesia. Lit by the rising Moon, Mt Bromo is the steaming crater in the center. The photographer is granted a free registration pass to the International Nightscape Conference on 2015 Sep 29 – Oct 2 in La Palma, Canary Islands.

Fifth place: “Above and Underneath” is the second winning image by Evgeny Trisko of Russia. The panoramic view of the night sky shows clouds illuminated by towns and villages hidden underneath the inversion layer, photographed in Pyatigorsk, Stavropol region of Russia, in February 2015. The photographer is granted a free registration pass to the 2015 International Nightscape Conference.

Honorable Mention Photos
About 70 other outstanding images are also selected by the judges. Some of these images were voted by several judges and they were competing closely with the winner photos. These entries are awarded by honorable mention in the contest video and on TWAN Guest Gallery .

Notes on Editing Issues and Technical Criteria
A large number of images with excellent composition and ideas didn’t reach the winners list because of being extreme blending of exposures where the foreground was an image of several minutes exposure and the sky image was a much shorter exposure. The contest is not limited to single-exposure photography and is open to “soft” composite imaging techniques limited to stacked star tails (without additional effects such as comet-tail) and stitched panoramas. In the 2016 contest there will be new categories to submit other composite images such as HDR and exposure blends, and multi-focus images (focus stack).

Compared to previous years in 2015 there were fewer entries with poor editing or over-cooked processing where the natural colors of night sky were altered by extreme white balance shift or applying too much color saturation. While digital processing is essential in any style of photography today, specially when dealing with challenging low-light conditions, according to the contest criteria entries should be gently edited so they preserve the natural-looking sky and the originality of a photograph (compared to digital art). Noted by the judge Tunc Tezel, â€œSince the 2011 contest I have been doing the initial sorting and evaluating of the entries. More and more people are doing nightscape or TWAN-style photography. I see an increasing number of pictures processed excessively. Very high contrast, over-saturation, too much sharpening, and extreme partial/preferential brightening of images. You might call this Saturationism! Great captures can turn to lost opportunities when processed too much. The night sky is beautiful enough as it is.â€

The Judging Panel
– David Malin (Widely considered the most distinguished night sky photographer in the world; TWAN member and consultant)
– Jim Richardson (National Geographic photojournalist for about 30 years, recognized for his exploration of environmental issues and advocacy for the night sky)
– Jerry Bonnell (NA