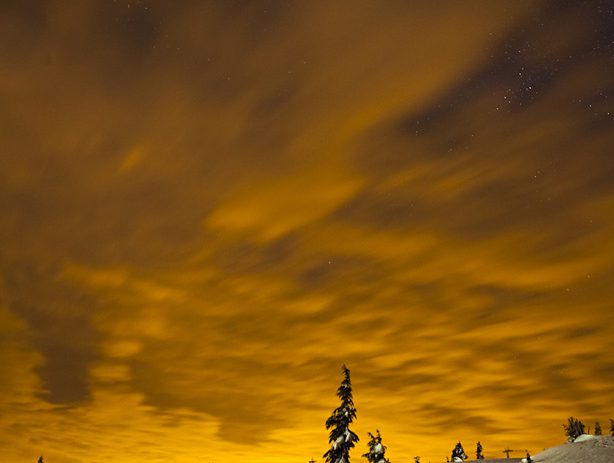 2011 May 9: Winners of the Second International Earth and Sky Photo Contest on Dark Skies Importance are announced. Two global programs of Astronomers Without Borders came together to organize this annual contest: The World at Night and Global Astronomy Month. Submissions to the contest had been received during the 2011 Global Astronomy Month (April). Submitted photographs were all taken since the beginning of 2010 and were all created in the â€œTWAN styleâ€â€”showing both the Earth and the skyâ€”by combining elements of the night sky set against the Earth horizon with backdrop of a notable location or landmark. This style of photography is called â€œlandscape astrophotography.â€

The contest was open to anyone of any age, anywhere around the world. About 240 entries were received with images made from about 30 countries including Argentina, Australia, Austria, Chile, China, Columbia, Cambodia, Germany, Greece, Hungary, Iceland, Indonesia, India, Iran, Ireland, Italy, Malaysia, Portugal, Slovakia, Spain, Switzerland, Turkey, UK, USA, and Venezuela. Nearly 25% of the entries were from the United States. Other major contributors were Iran, Germany and China.

According to the contest theme of â€œDark Skies Importance,â€ the submitted photos were judged in two categories: â€œBeauty of the Night Skyâ€ and â€œAgainst the Lights.â€ The selected images are those most effective in impressing people on both how important and amazing the starry sky is and how it affects our lives, and also how bad the problem of light pollution has become. Today, most city skies have become virtually empty of stars. Light pollution obscures the stars, interferes with astronomical observatories and, like any other form of pollution, disrupts ecosystems and has adverse health effects.

The contest organizers wish to gratefully acknowledge the collaboration of the following sponsors in providing the contest prizes:

The Photo Contest and Global Astronomy Month: the submission period of the Earth and Sky Photo Contest was during April 2011 as part of the worldwide activities coordinated by Astronomers Without Borders – for the Global Astronomy Month – an annual program for the international astronomy community to share the beauty of the night sky with others and connect with other astronomy enthusiasts around the world. The contest received notable collaboration from the GAM2011 coordinator, Mr. Thilina Heenatigala.

Contest Winners
The first prize in the Against the Lights category goes to Thomas Kurat for his photo â€œAlps at Nightâ€. It shows the starry sky above a misty Alpine valley and village lights in Austria. The photo won an Explore Scientific 127mm refractor telescope.

The first prize in the Beauty of the Night Sky category goes to Stephane Vetter for his photo â€œA Starry Night of Icelandâ€ which displays the northern lights and the Milky Way above arctic landscape of Iceland. The photo won an ED 80mm ED 80mm Apochromatic telescope provided by the Canadian Telescopes.

The second-place winner in the Against the Lights category is Mehdi Momenzadeh from Iran for his panoramic photo â€œIsfahan Milky Wayâ€. The photo won a $400 gift certificates from Dubai Telescope; a leading telescope and astronomical equipment provider in the Middle East.

â€œGalactic View from Planet Earthâ€ by Alex Cherney from Australia is the second-place winner in the Beauty of the Night Sky category, receiving a $300 gift certificates from Woodland Hills Camera and Telescopes and one year subscription to Sky&Telescope magazine.

The other winners in the Against the Lights category are:
Third place: â€œLisbon Sky Lightsâ€ by Miguel Claro from Portugal who receives a 10X42 Parks binocular from Scope City and a Night Sky Observers Guide. The photo shows stars and the crescent moon trail over a landmark bridge in Lisbon dominated by the cityâ€™s light pollution.

Fourth place: â€œVenus above Reunion Islandâ€ by Luc Perrot who receives a $100 gift certificates from Scope City and one year subscription to Sky&Telescope magazine.

Fifth place: â€œLights from the Hidden Cityâ€ by Ben Canales who receives a $100 gift certificates from Woodland Hills Camera and Telescopes. The photo is taken from mountains near Portland in the United States and displays how the lights from the cty illuminate clouds in the night sky.

The other winners in the Beauty of Night Sky category are:
Third place: â€œBeauty of Southern Skyâ€ by Luc Perrot who receives a 10X42 Parks binocular from Scope City and a Night Sky Observers Guide. The French night sky photographer made this panoramic image from Reunion Island in the southern Indian Ocean.

Fourth place: â€œThe Great Wall at Nightâ€ by Xiaohua from China who receives a set of 5 planetary telescope filters from Lumicon. The photo displays the Milky Way above one of the gates to the Great Wall of China.

Fifth place: â€œStartrails above an Alien Lakeâ€ by Grant Kaye who receives a $100 gift certificates from Woodland Hills Camera and Telescopes. The image shows startrails around the north celestial pole as captured from the bizarre looking structures at shores Mono Lake in California.