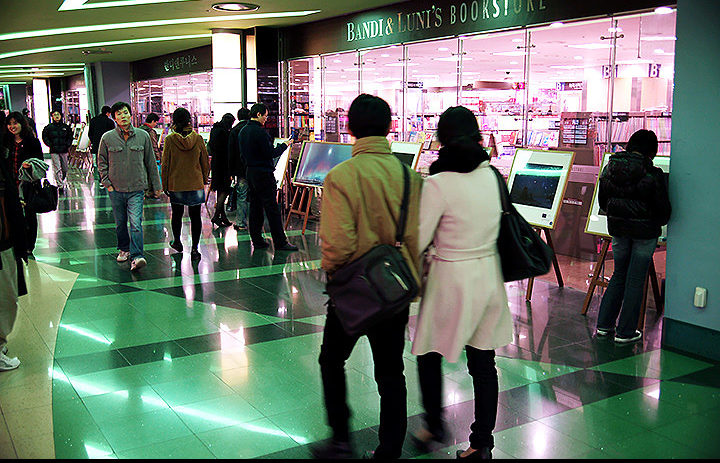 The World at Night traveling exhibition in South Korea was organized by collaboration between Korea Astronomy and Space Science Institute (National Observatory), Korea national committee of International Year of Astronomy (IYA2009), and Seoul City Government. After the first TWAN-Korea exhibition in March 2009 in central Seoul, the display traveled to about a dozen other locations including: National Science Museum in Daejeon (April), Kyeonggi Art Hall in Incheon (July) as part of the Puchon International Fantastic Film Festival, Busan City Hall (July), Daegu Citizen Center (August), Ulsan Namgu Culture Center as a special exhibition in Ulsan International Photography Festival (September), and outdoor exhibition on the most popular street of Seoul, COEX (Dec. 2009-Jan. 2010). According to Kwon O Chul, the Korean TWAN Photographer and exhibition coordinator, the exhibit will be permanently installed in the Korea Astronomy and Space Science Institute. Besides the exhibitions there was media coverage to further promote TWAN. A photo-based TWAN article appeared in the March 2009 issue of monthly Science-DongA, the leading Korean popular science magazine which reaches 100,000 people in the country. An online TWAN gallery was published on Naver, the most popular Korean website. The gallery was awarded as the top viewed photo content of the website during 2009. A delicate high quality TWAN exhibition book was published (with captions in English and Korean) along with the 2010 The World at Night wall calendar (Korean). TWAN team wishes to thank all the collaborators in Korea for the excellent effort to spread the word and beauty of astronomy, using The World at Night photos. Planning for TWAN events in Korea for 2010 and beyond continues and venues with interest to hold the exhibits and workshops are welcomed to contact us.