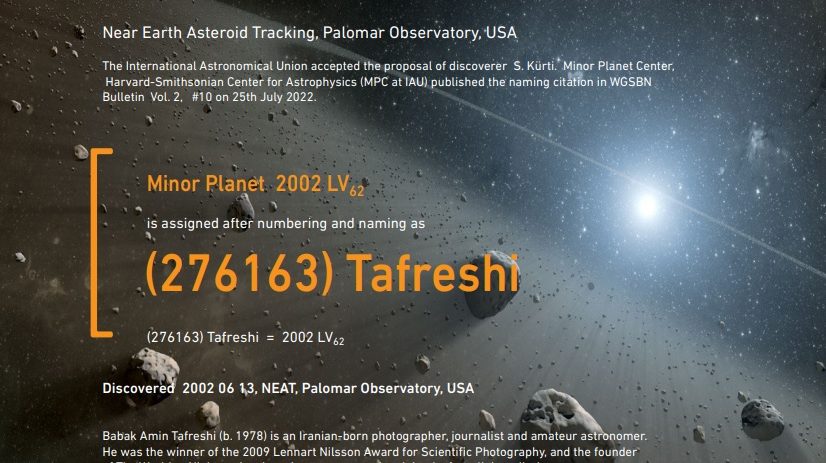 Amateur astronomer Stefan Kürti from Nové Zámky, Slovakia, has been searching archive images for more than a decade. Thanks to a publicly accessible database of observations, he searches for asteroids that have escaped the attention of professionals.

Asteroid now known as (276163) Tafreshi was identified by its discoverer in July 2009, on archival images from June 13, 2002. From the observations, he determined the probable trajectory and managed to track down the previously unknown object on images from NEAT image archive in another four nights. Based on these data, the Minor Planet Center (MPC) in Cambridge, near Boston, assigned the new body with provisional designation 2002 LV62. Subsequently, the MPC added additional observations from years 2003 – 2011. These significantly improved the trajectory of the asteroid and this allowed the MPC to give it a permanent number of 276163.

The International Astronomical Union (IAU) named the asteroid with the number (276163) and provisional designation 2002 LV62 as Tafreshi. The minor planet was discovered in images taken on June 13, 2002 at the Mt. Palomar, USA. Minor planet Tafreshi orbits the Sun once every 5.1 years and its diameter is approximately 1900 meters. On its path the distance of asteroid from the Sun varies from 2.3 to 3.0 astronomical units. Astronomical unit (AU) is roughly the distance from Earth to the Sun and equal to 150 million kilometers. Currently, the asteroid is moving in the constellation Sagittarius. Due to its current position in relation to the Sun and the Earth, it is currently observable with medium sized telescopes with a diameter of 50 cm, and using a CCD camera. There is no danger of the body approaching the Earth, as it is not a potentially hazardous object (PHO), or a near earth object (NEO). 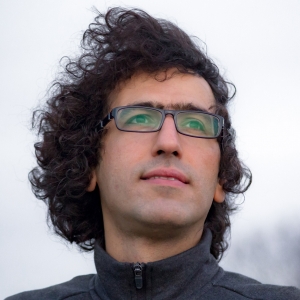 Babak Amin Tafreshi (b. 1978) is an Iranian-born photographer, journalist and amateur astronomer. He was the winner of the 2009 Lennart Nilsson Award for Scientific Photography, and the founder of The World at Night project in order to preserve the night sky from light pollution.

Asteroids are smaller celestial bodies in our solar system. The largest known asteroid, Pallas, has a diameter of approx. 550 kilometers. In total, more than 200 objects exceed 200 km in size. According to estimates, the number of 1 km asteroids is 750,000. The smallest ones that astronomers detect today are 5-10 meters. More than 1.2 million asteroids have been observed to date, but actually there may have been twice as many.

The Minor Planet Center in Cambridge, Massachusetts is the center where they record and process all observations of asteroids and comets that have been spotted by astronomers around the world. The majority of asteroids orbit in the space between Mars and Jupiter, known as the main asteroid belt. Another group are near-Earth asteroids that come close to our planet, and there are also some that cross the Earth’s orbit, which can pose a threat in case if   it hit our planet.

How is an asteroid discovered? This is done by the astronomer taking three or more images with a telescope equipped with a CCD camera. These are analyzed using by a special software. A certain time elapses between each recording, e.g. say 30 minutes. As asteroids move, their positions relative to distant stars change, revealing themselves relative to stationary stars. A special computer program created for the evaluation of the observations enables quick and easy search and analysis of moving bodies. After finding a moving object, another check follows when the asteroid database is checked to see if it is a known asteroid. If, according to the MPC database, there is no known asteroid at the detected position and time, then it is a new discovery. Then additional observations are required to input the unknown object into the database. When this asteroid is detected from the second night, the discovery is given a preliminary designation, e.g. 2022 LG11. The final permanent number is given to it when the celestial body has been observed for several years and the movement of the asteroid can be calculated with great accuracy years in advance.

Today, more than 600,000 asteroids have been numbered. It usually takes 6-8 years from its discovery to its permanent number. Since the given celestial body must be observed during at least four apparition around the Sun, it happens that an asteroid can be numbered ten or even more years after its discovery. Only then can the explorer suggest a name. Currently, more than 23,000 asteroids have been named. 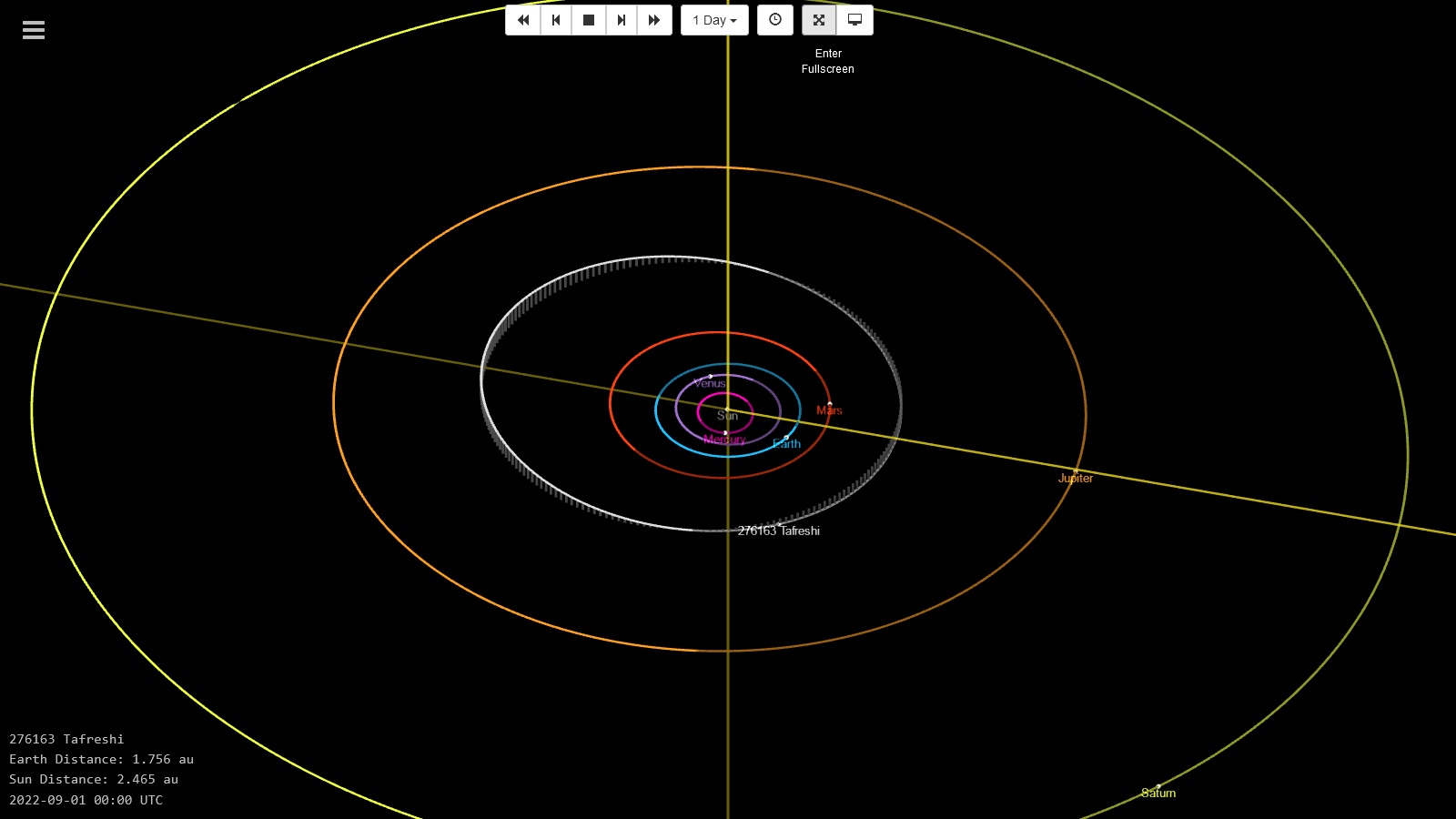