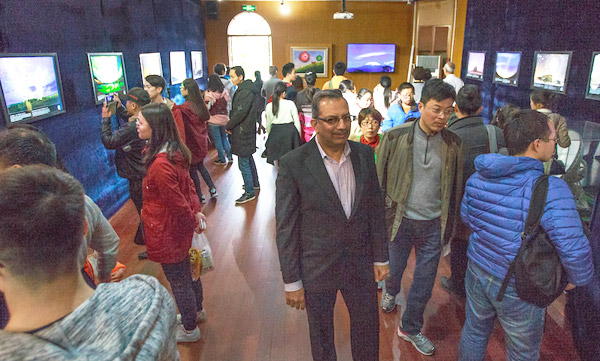 The first TWAN Exhibition of China during the Global Astronomy Month is holding at Shanghai Astronomical Museum. The museum is a popular public place located at Sheshan Observatory founded by French Jesuits in 1900.

As supported by Shanghai observatory, Chinese Academy of Sciences. The exhibition will lasts 4 months (2017 March 26th – 2017 July) with the theme of “One World, One Sky”. It was created based on 40 photos which come from TWAN main gallery, Guest Gallery and Chinese TWAN contest winners. There are also a 8 minutes video and a regional map of the Earth at Night which marks the imaging location.

This collection of nightscape images from all 7 continents were carefully selected to display every aspect of practical astronomy, Showing that the eternally peaceful sky looks the same above all the landmarks and symbols of different nations and regions, attesting to the truly unified nature of Earth as a planet rather than an amalgam of human-designated territories. Which present the theme of the exhibition â€œOne World, One Skyâ€.

Hou Jinliang, the Secretary of Shanghai observatory, Ajay Talwar and Jeff Dai, the TWAN members from India and China, Zhou Yannan, the winner of TWAN contest in 2015 attend the opening ceremony on 2017 March 25th.
The physics opening of The 2017 International Earth and Sky Photo Contest was also hold along with the exhibit.

In March 26th – March 28th. Ajay and Jeff had a research at Kaihua, Zhejiang province of China. Kaihua have several ancient chinese villages with natural dark sky. Cooperating with IDA Beijing and Starry committee of China, itâ€™s planing to be one of the first dark sky reverses in China which will benefit to the citizens of Yangtze River delta. Ajay and Jeff also have a public lecture in the local Hope Primary School, high light the importance of night sky as an essential part of our life.

The exhibition will be expand to the schools, shoping-mall,and the other public places for the further influence of TWAN spirit in China.