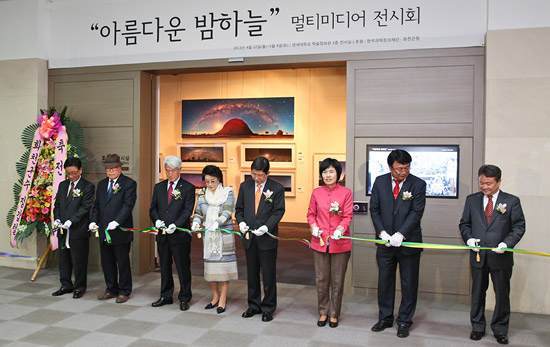 2013 May 6: Beautiful Starry Nights. This was the title of TWAN 2013 exhibition in Seoul. It was hosted by Yonsei university, a private leading research university in the country. The exhibit was open to public between April 22 to May 4, 2013. It was organized by Jo Kyong-Chol Memorial Association (Kyong-Chol 1923-2010 was a prominent Korean astronomer and science celebrity who led a lot of astronomy popularization programs in the country).

See the media coverage of the exhibit by the local TV (in Korean).

According to Kown O Chul, TWAN member and coordinator in South Korea, the exhibition was well received by the public with a wide range of photos from dancing aurora over polar areas to stunning dark desert skies and Himalayan landscapes. The collection presented a number of the latest TWAN imagery.

Prior to this event, The World at Night traveling exhibition in Korea was organized during the International Year of Astronomy (2009) and the following 2 years by collaboration between Korea Astronomy and Space Science Institute (National Observatory) and Korea national committee for International Year of Astronomy. The exhibit reached over a dozen of venues across South Korea and finally was permanently installed in the Korea Astronomy and Space Science Institute.

The photo reports of TWAN previous exhibits in Korea:

The First Exhibition in Korea