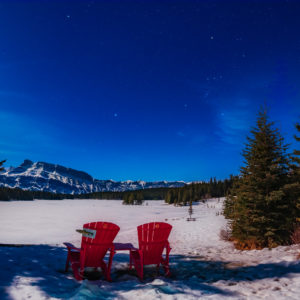 Orion setting over the iconic Victoria Glacier at Lake Louise, frozen here in March, and with the scene lit by the light of the waxing Moon. I shot this during the few minutes when the star Sirius had just appeared from behind Mount Fairview at left, and just moments before the star Rigel in Orion set behind Mount Victoria. The Hyades and Pleiades in Taurus are at right over Mt. St. Piran and the Beehive. I was several hundred metres out from shore on the frozen lake.

This was March 19, 2019. This is a panorama of 3 segments stitched with Adobe Camera Raw, each segment 8 seconds at f/3.5 with the Sigma 24mm Art lens and Nikon D750 at ISO 800. Minor adjustments of tonal balance applied with luminosity masks from Lumenzia.

The second image is of the iconic red chairs of Parks Canada, at frozen Two Jack Lake, Banff National Park, and under the moonlit winter sky, with Orion and Canis Major over Mount Rundle to the south. Sirius is the bright star over Rundle.

This was March 18, 2019, with the scene illuminated by the gibbous Moon just at the frame edge here.

This is a panorama of 11-segments, each 10 seconds at f/4 with the Sigma 24mm Art lens and Nikon D750 at ISO 800. Stitched with Adobe Camera Raw. I added an Orton glow effect with Luminar 3. The chairs, being in shadow, I light painted briefly with a white LED light.