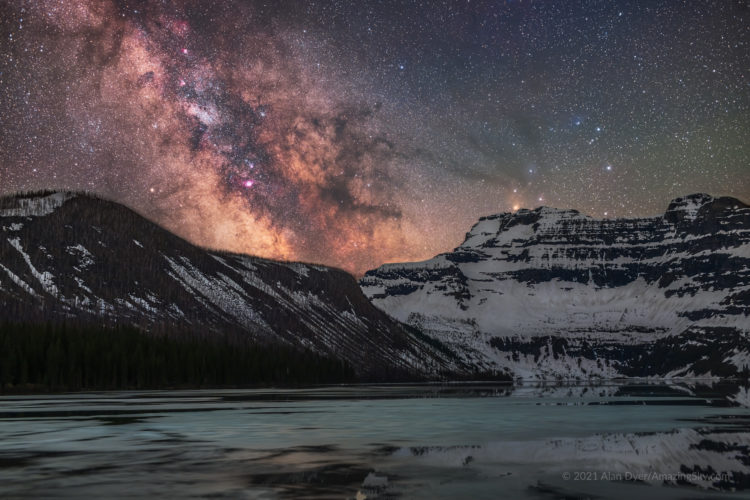 The Milky Way, with the starclouds of the galactic core in Sagittarius at left and the head of Scorpius at right, over a still ice-covered Cameron Lake, a high altitude alpine lake in Waterton Lakes National Park, Alberta, Canada. This was on a very clear night on June 2, 2021.

The Lagoon Nebula, M8, and M24 Small Sagittarius Starcloud are prominent at left. Antares and the Rho Ophiuchi dark lanes are at right just over the mountain ridge, with the tracked shots timed to catch Antares before it set behind the peak. The Galactic “Dark Horse” is at centre, with this area of sky about as high as it would get for the night — this is right on the Canada-US border at 49° N.

The landscape is lit only by starlight and residual airglow. Cameron Lake is in the extreme southwest corner of Alberta and is certainly one of the darkest places in Canada. Waterton Lakes is a Dark Sky Preserve. The slope at left is scarred from the 2017 Kenow Fire.

This is a blend of tracked and untracked exposures: a stack of 2 x 8-minute untracked shots at ISO 400 for the ground, and a stack of 4 x 2-minute tracked shots at ISO 1600 for the sky. All were with the 35mm Canon L-series EF lens at f/2.8 and Canon Ra camera. The tracker was the little MSM Move-Shoot-Move Rotator, polar aligned with the laser. The ground shots were taken immediately after the tracked sky shots. Stacked, masked and blended in Photoshop.